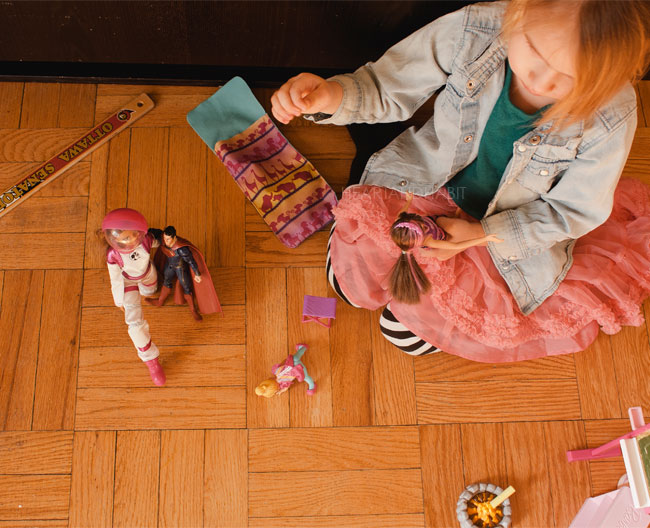 I was always under the mind set that I would raise my little girl away from princesses, pink and probably even Barbie. I, for some reason assumed that I could a) keep all these things out of my house or that my daughter would just naturally not be interested in them. b) the classic more “girly” toys wouldn’t be a great toys for her to play with.

My Mom will probably laugh a little at this post, because I’m pretty sure she laughed at me when I told her my plans for keeping Barbie and all the girly toys, away until Harlow was old enough to decide if she wanted them herself. I honestly do not know the real reason why I was assumed Barbie wouldn’t be a toy I wanted her playing with, I mean I really dug her as a kid – my sister and I would play with our brother’s GI-Joes and Barbies as one big happy family (usually Barbie would boss GI-Joe around after he saved her from some really dangerous situation), it was great. Sure her measurements are a little cartoon-y, and she is never not wearing high heel shoes and make-up and always always with the pink – but she’s a doll! And I guess we can’t all be wearing jeans, grey tees and sneakers all the time. I wasn’t the most girly little girl and I sure didn’t grow up to be affected by a dolls physical appearance, so I’m sure Harlow won’t either. Really she’s a doll, and one that has had tons of careers and a whole isle of diverse friends – really not as bad as adult me had “assumed”.

When Barbie contacted me to partner with them, to be very honest (sorry Barbie) I almost said no. I literally lost sleep over the idea, mostly because it didn’t fall into my “plan” but also because it made me look at why I wasn’t letting Barbie into my house and then I sorta felt a silly.

I tried to stay away from the whole princess thing, but I couldn’t fight it. I tried to stay away from the whole pink thing, but I couldn’t fight it. And well Barbie, I tried to stay away from her too. I tried really hard, I’m embarrassed to say I would say no to book choices in the library, show requests on netflix and toy store requests – all because I thought “I can keep this doll out of her childhood”. But what I was really doing, is not letting her make her own choices. It’s silly, a simple email from a company caused so much turmoil for me because I realized I wasn’t being the parent I always thought I was. I had always said; “wait till she’s older and if she wants these toys, she can have them” but the thing is, she is a older and asking for these toys and I was still saying NO. Not the Mom I thought I was and not part of the parenting “plan” I had set out for myself, at all.

I was nervous signing on to this partnership (so nervous), but the morning after Harlow got her package in the mail. My first words to Chris over coffee were about about how happy I was that I did join. Because it’s not about me, it’s totally all about her. I didn’t say no because of my own plans and hangups, I said yes because I followed her choice. And look at what that got me… 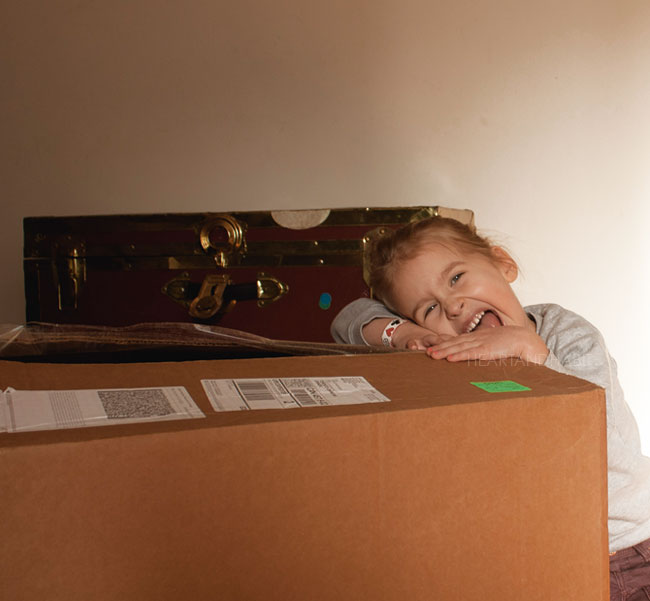 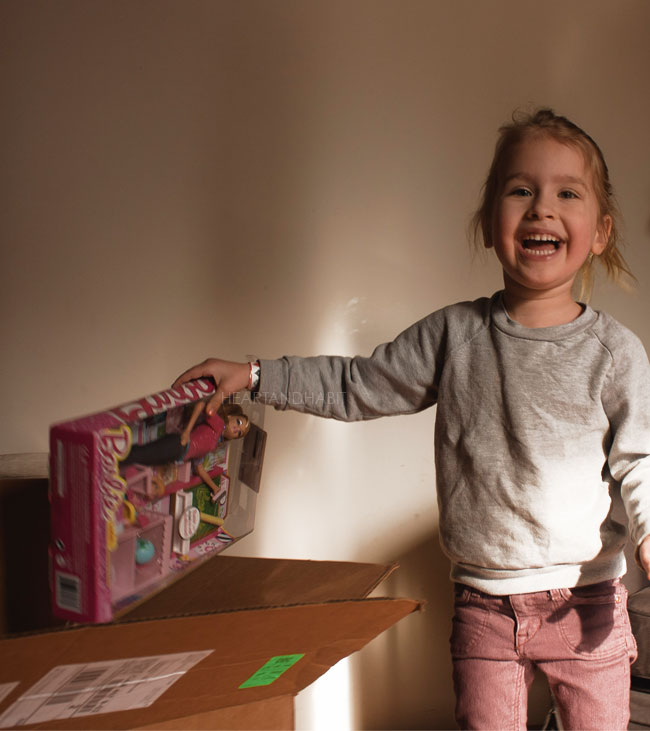 I mean the pure happiness, all from a box of toys. A box of toys I might not have gotten her on my own, excuse me while I devour a steaming hot bowl of word soup.

She is a tom boy, and a girly girl, a hilariously, talented, smart, tough little girl. She plays with her Barbies as if they are babies, she mothers them and then later has them kicking bad guys butts beside the super hero’s. She’s well rounded and it’s been pretty fun seeing all of those things come out in her playtime. So far Having Barbie in my home has only brightened Harlow’s days and made play time so much more comedic to listen to (seriously, listening to the kids play is just the best). 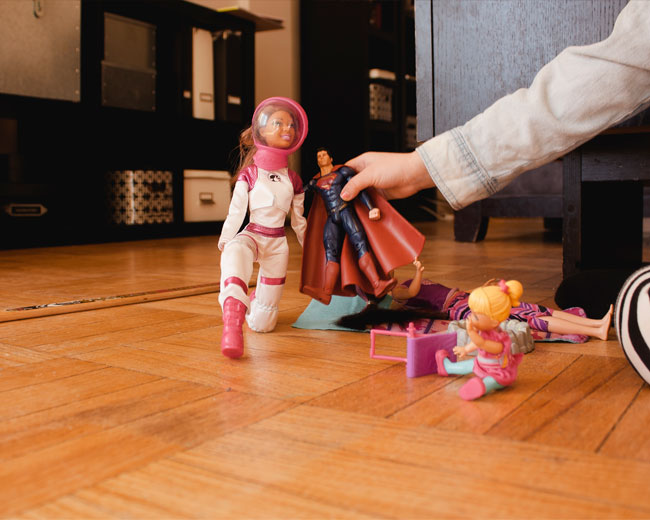 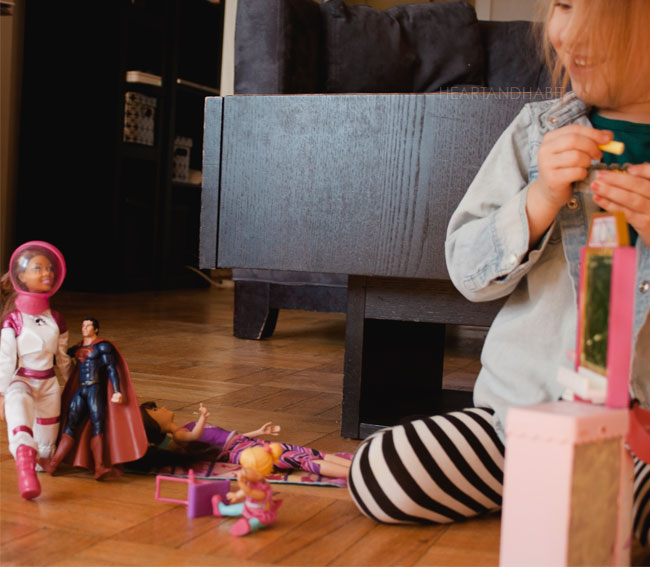 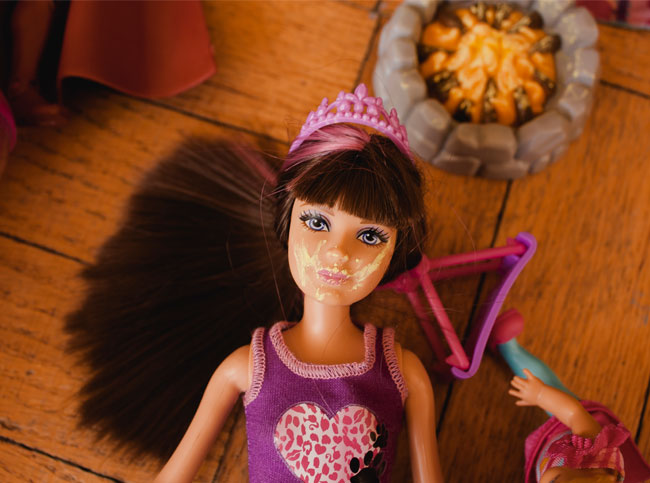 Also, I’m pretty happy she has someone to test her makeup skills out on, otherwise that could have been me there. How do you feel about Barbie? Does your daughter play with her?

Often the greatest moments of joy and self-discovery take place during everyday playtime. Barbie can be the star of your child’s imaginative stories, the embodiment of her biggest dreams, and the vehicle for conversations and memories. #BarbieProject