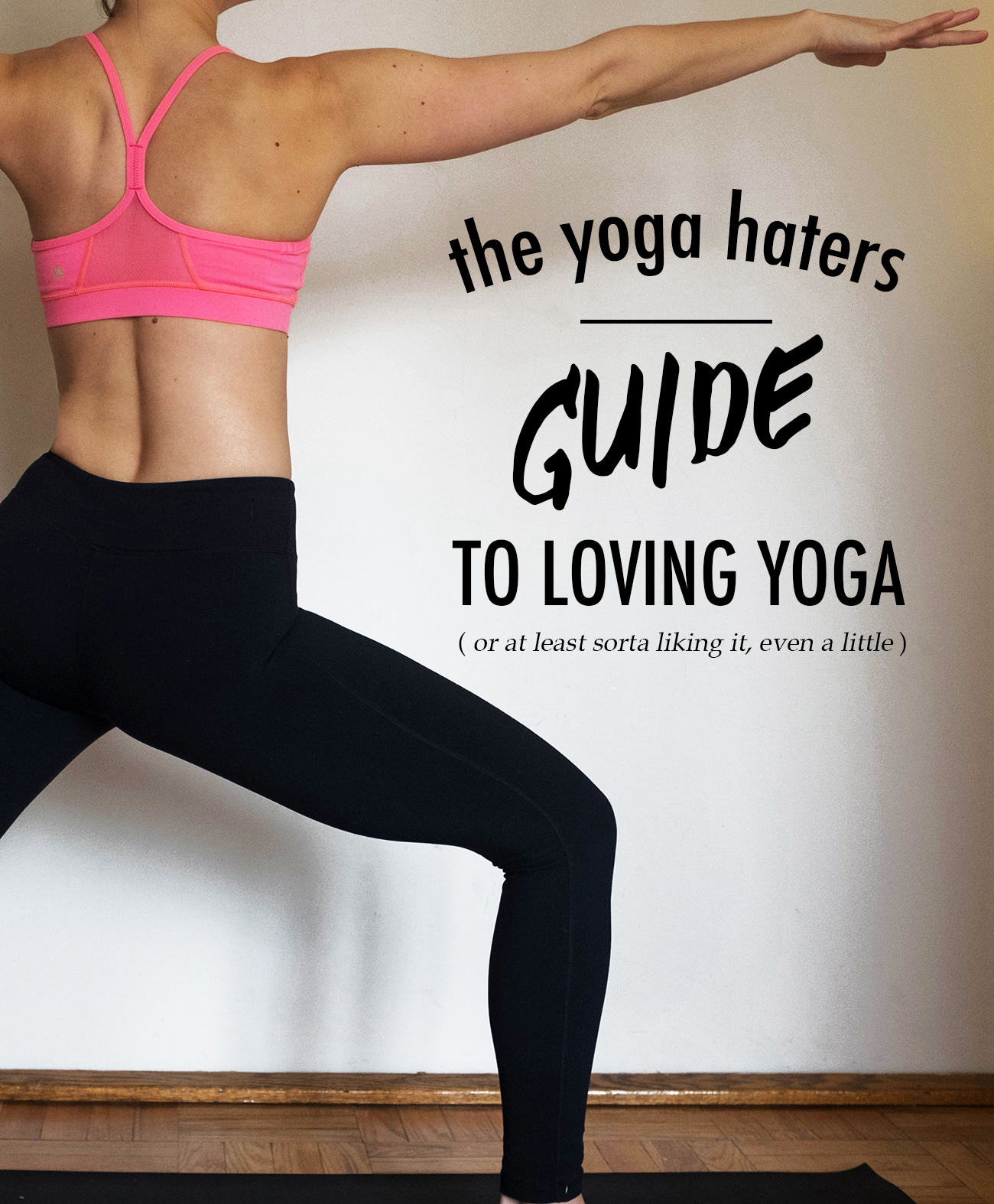 I had sorta planned on not writing any more posts about yoga, mostly since there is just only so much I can share at the level (non-teacher) that I am at. But hey look-y here, the topic creeped in again, cultivating a simple, stylish and content every day is heart and habit‘s focus and yoga fits somewhere in between their nice and cozy like — so creep in from time to time, it will.

Alot of what I have to say, tips to get you thinking about liking yoga will work for a Pilates practice too, I just don’t do it enough of it to have kool-aid to share. Let’s just go ahead and look at why you swear you don’t like yoga: Maybe you tried yoga a few times and you instantly felt like it WAS NOT for you? Or you tried yoga and thought you just weren’t flexible or strong enough to do any of it? Maybe the whole idea of yoga breathing and namaste-ing makes your eyes roll? Maybe the idea of moving so slowly (or sometimes not at all) sounds like the most boring (worst) idea in the entire world? Or maybe it’s just all of these things, balled up into one big yoga-no, for you? It’s cool, I get it and I was there for at least a few of these reasons many (many) moons ago before I found my yoga sweet spot. So hear me out just for a bit, maybe what I have to say  will have you thinking “she’s so freaking smart” or at least make you smile a little — either way give THE SWORN YOGA HATERS GUIDE TO LOVING YOGA, a listen.

1. GIVE IT ANOTHER LOOK/A DIFFERENT LOOK.

Ignore all the hype, the tips (but not these tips, obvi) the “culty” feelings and the thoughts you thought yoga was or wasn’t. Go back and give it a try with a totally open mind. I think, every one pulls something different from yoga and everyone goes for a different set of reasons, all of which grow and change over time. So if you are going for fitness, clarity, calmness, general health it doesn’t matter, there truly is something in there for everyone.

2. LOOK AT THOSE REASONS WHY YOU SWEAR IT’S NOT FOR YOU.

Like truly look at them, in the same light way you would if you were looking at your friends issues, minus all the tissues (har har). Sometimes (not all the time), but sometimes the reasons why we avoid something are also the reasons why we should do it. Like say for instance, if you avoid yoga because it is just too dreadfully slow for you? Maybe it’s because slowing down is hard, being in your head is hard and maybe getting past the hard would be super beneficial and make you even more awesome?

3. YOU DON’T HAVE TO BE ANYTHING TO PRACTICE.

Sure most of the photos you see of people in yoga poses are probably people who are really strong and flexible. But that doesn’t mean they were strong and flexible to start with. Don’t assume or compare yourself to someone else (like, ever in life) most people who practice yoga are not flexible at all (like me) but guess what’s cool about yoga? It can help make you more flexible (like it did for me) even if more flexible to you means just an extra 1/2″ more of movement, that’s cool (you’re cool).

4. HAVE YOU EVER SEEN AN OLDER YOGI?!

Do you remember that older yogi lady who used to teach yoga on tv in the early weekday mornings? It literally felt like she never aged and was doing that same morning show for my entire life. Do you know the one? Or maybe you know of another one. The simple fact that people just like these 6 amazing people over the age of 90, can still practice yoga and can probably do more crazy poses than you (and me) is pudding proof that it’s crazy good for you and should be at least given another shot.

Yes I’m gung-ho, head over heels in love with the practice. But that’s me, you don’t have to drink my kool-aid or subscribe to my same love newsletters. Just try it, and take it for what it is for you because it probably won’t be the same for you, as it is for me or anyone else you meet (because we are different people). Some of the things they talk about in class might make you squirm, or your eyes roll but it’s okay — you don’t have to agree with it all. Just like you didn’t agree with everything they said at the gym/goodlife, everything your parents told you growing up or your boss tells you on the daily. Just be open, take things for what they are and how they apply to you. Be full-on in your own way, whatever that means — it’s your way so it’s already gonna be awesome.

What do you think? Are you like “yoga? hell no”?

*Also since it’s February, and we are fully on the topic of health. Goodlife is holding an #iheartexercise challenge in support of healthy hearts and just overall health. They have been (I’m later than I planned at sharing this) posting free and very great tips, recipes, daily challenges and tons more on this private facebook group. It’s free to join, and maybe it might just give you more than 5 reasons to heart exercise if you are a sworn exercise hater?

related and helpful: 5 Things I Thought I Knew About Yoga, But Was Wrong The Lazy Girls Guide To Staring A Yoga Practice The Big List of At Home Yoga Resources How Yoga Made Me A Better Human Being